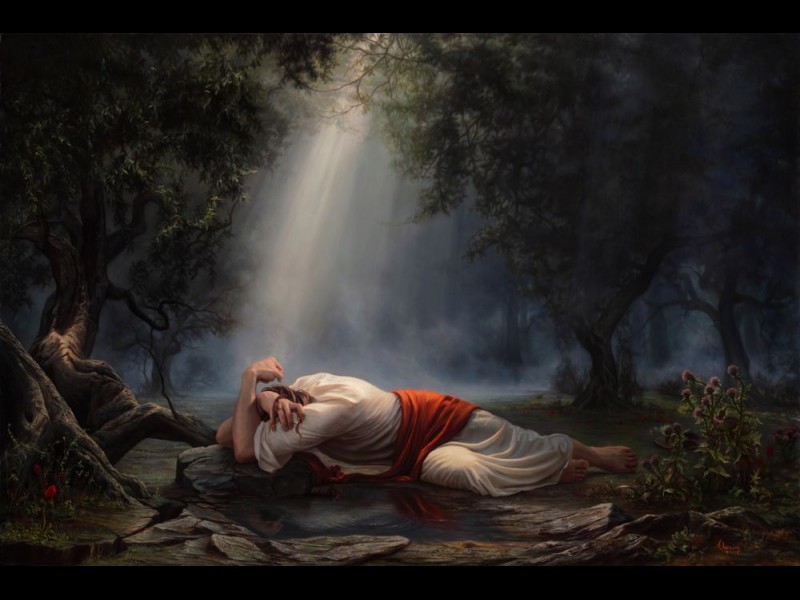 The narrative of the Garden of Gethsemane can be found in Matthew 26:36-56, Mark 14:32-52, Luke 22:39-53, and John 18. After the Last Supper in the Upper Room, after Judas left to inform the main ministers that Jesus would be powerless, Jesus drove His residual supporters to the Garden of Gethsemane. The garden, conceivably an olive forest (“Gethsemane” signifies “oil squeeze”), sat in favor of the Mount of Olives. John 18:1 depicts the region as “finished the gorge of the Kidron.”

When Jesus and the supporters arrived, Jesus drew away Peter, James, and John—His center three adherents. He requesting that they remain with Him. “My spirit is profoundly lamented, to the point of death; stay here and keep watch with Me” (Matthew 26:38). He at that point went somewhat more distant, tumbled to His face, and, in anguish, requested that God discover another way. His sweat fell like drops of blood; God sent a blessed messenger to comfort Him. We can’t know the profundities of Jesus’ distress as of now. While Jesus sobbed in anguish, Peter, James, and John nodded off.

Jesus came back to the three and woke them up. “All in all, you men couldn’t keep watch with Me for 60 minutes? Continue watching and supplicating, that you may not go into allurement; the soul is ready, but rather the substance is feeble” (Matthew 26:40-41). Again He asked, modestly and currently submitting to the will of God. In any case, loaded with great nourishment and wearied from a passionate night, the supporters nodded off once more.

Jesus rose. When He discovered them resting once more, He let them be. He repeated His trouble of what He should do, and also His readiness. At that point He came back to His supporters and woke them, saying, “Emerge, let us be going; observe, the person who deceives Me is close by!” (Matthew 26:46).

As Jesus spoke, Judas arrived, trailed by a substantial number of men with swords, lights, and clubs—a Roman companion (of 300-600 men) and officers from the central clerics and Pharisees. Judas called to Him—calling Him “Rabbi,” or educator—and kissed Him, a customary welcome at the time. On the off chance that they didn’t get the photo, Jesus asked the fighters their identity searching for. When they said “Jesus the Nazarene,” Jesus reacted, “I am He.” Whereupon the monitor and warriors moved back and tumbled to the ground.

Jesus submitted to the horde, however, His devotees did not. One inquired as to whether they should battle back. Diminish didn’t sit tight for an answer. He drew his sword (perhaps along angler’s blade) and remove the ear of Malchus, the esteemed minister’s slave. The Bible doesn’t detail why. Maybe Malchus was introducing and alternate educates away. Or then again perhaps he had his hands on Jesus. We don’t have the foggiest idea. In any case, Jesus reprimanded Peter, as a result revealing to him that if viciousness was his first impulse, savagery would be his demise. “Or on the other hand do you imagine that I can’t engage My Father, and He will without a moment’s delay put available to me in excess of twelve armies of holy messengers? How at that point might the Scriptures be satisfied, that it must happen along these lines?” (Matthew 26:53-54). To underline His point, Jesus recuperated Malchus’ ear.

Jesus at that point called attention to the weakness of the crowd, that they came to stand up to one unarmed man in the dead of night as opposed to taking Him in the day where the general population could see. In any case, as in His petition, He recognized this was God’s arrangement. Every individual from the horde was in charge of his own decision, however, as far as concerns Jesus He would not battle against God’s guideline.

As the gatekeepers took Jesus away, the devotees ran, one (maybe Mark) exposed.

How did Judas know where Jesus would be? Conceivably in light of the fact that Jesus regularly took the followers to the Garden of Gethsemane. Luke 22:39 says it was Jesus’ “custom.” John 18:2 says, “Now Judas additionally, who was double-crossing Him, knew the place; for Jesus had regularly met there with His supporters.”

How did the creators of the Gospels know what Jesus asked when the three closest were dozing? The Bible doesn’t state. Either Jesus let them know after the restoration, or the Holy Spirit educated them.

Why, other than the self-evident, was Jesus so struggled on the off chance that He’d known up and down this was coming? The scourging ripped His skin off. The thistles on the crown were inches long, sending blood pouring from His scalp. What’s more, the hours on the cross were the only torment. Be that as it may, Jesus was quiet amid the torment. It was the expulsion of God’s essence and love that sent Him reeling. Jesus did not scrutinize the physical agony, but rather when the Second Member of the Trinity was expelled from fellowship with alternate individuals, He cried, “Father, why have You spurned Me?”

For what reason did the troopers fall back when Jesus stated, “I am He”? Book of scriptures renditions include the “He” for elucidation, however, what Jesus really said was “I AM.” This is the name of God (Exodus 3:14). Jesus uncovered Himself as God. Looked with the name—the power and personality—the gatekeepers fell in dread of His magnificence.

In antiquated Israel, the divinely selected individuals—ministers, prophets, and lords—were blessed with olive oil. Jesus was blessed with sweat in an olive woods. It is fitting that Jesus, our Prophet, Priest, and King was in the Garden of Gethsemane—an olive woods—as He started His satisfaction of His part of Messiah, the Anointed One.