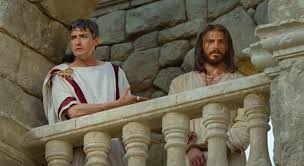 The night is attracting to a nearby when Peter denies Jesus for the third time. The individuals from the Sanhedrin have completed with their deride preliminary and have scattered. Come sunrise Friday morning, they reconvene, prone to give some shroud of legitimateness to the unlawful night preliminary. Jesus is brought before them.

Again the court requests: “In the event that you are the Christ, let us know.” Jesus answers: “Regardless of whether I let you know, you would not trust it by any stretch of the imagination. Besides, in the event that I doubted you, you would not reply.” However, Jesus gallantly shows to them his way of life as the one predicted at Daniel 7:13. He says: “Starting now and into the foreseeable future the Son of man will be situated at the effective right hand of God.” —Luke 22:67-69; Matthew 26:63.

They hold on: “Are you, along these lines, the Son of God?” Jesus answers: “You yourselves are stating that I am.” This appears to legitimize slaughtering Jesus on the charge of obscenity. “For what reason do we require advance declaration?” they inquire. (Luke 22:70, 71; Mark 14:64) So they tie Jesus and lead him away to Roman Governor Pontius Pilate.

Judas Iscariot may see Jesus being taken to Pilate. At the point when Judas understands that Jesus has been censured, he feels a specific regret and hopelessness. Be that as it may, instead of swinging to God in obvious contrition, he goes to give back the 30 bits of silver. Judas tells the main clerics: “I trespassed when I deceived pureblood.” But he gets the wanton answer: “What is that to us? You should see to it!” —Matthew 27:4.

Judas tosses the 30 silver pieces into the sanctuary and afterward adds to his wrongs by endeavoring to self-kill. As Judas attempts to hang himself, evidently the branch to which he ties the rope breaks. His body drops to the stones beneath, where it blasts apart. —Acts 1:17, 18.

It is still at a young hour toward the beginning of the day when Jesus is taken to the castle of Pontius Pilate. However, the Jews taking him there decline to enter. They imagine that such contact with Gentiles will debase them. That would exclude them from eating the dinner on Nisan 15, the principal day of the Festival of Unleavened Bread, which is seen as a component of the Passover time frame.

Pilate turns out and asks them: “What allegation do you bring against this man?” They react: “If this man were not a miscreant, we would not have given him over to you.” Pilate may feel that they are attempting to weight him, so he says: “Take him yourselves and judge him as per your law.” The Jews uncover their deadly purpose, answering: “It isn’t legal for us to execute anyone.” —John 18:29-31.

The religious pioneers don’t disclose to Pilate that they had denounced Jesus for obscenity. Presently they trump up various charges: “We discovered this man [1] subverting our country, [2] prohibiting the paying of assessments to Caesar, and [3] saying he himself is Christ a king.” —Luke 23:2.

As a delegate of Rome, Pilate has a purpose behind worry about the charge that Jesus is asserting to be a lord. So Pilate reenters the royal residence, calls Jesus to him, and solicits: “Are you the King from the Jews?” as such, ‘Have you infringed upon the law of the realm by proclaiming yourself to be a ruler contrary to Caesar?’ Perhaps to discover the amount Pilate as of now has found out about him, Jesus says: “Are you soliciting this from your own particular inventiveness, or did others inform you concerning me?” —John 18:33, 34.

Purporting numbness of the actualities about Jesus yet craving to learn them, Pilate answers: “I am not a Jew, am I?” He includes: “Your own particular country and the central ministers gave you over to me. What did you do?” —John 18:35.

Jesus does not endeavor to avoid the focal issue —authority. He replies in a way that no uncertainty incredibly astounds Governor Pilate.